The majority of the time, we were staying in La Fortuna, so all the food discussed below are in that area.

END_OF_DOCUMENT_TOKEN_TO_BE_REPLACED

Binge Kitchen– This is a small entirely vegan restaurant. I went with my mom and we decided to try a few things. First, I got the charcoal lemonade because it is trendy and I wanted to see what the hype is about. Plus it is fun to drink a black liquid. It was good, but I didn’t find it to be much different than regular lemonade. As an appetizer, we split the Crispy Cauliflower with ranch. This was my first time trying this and it was delicious. My mom ordered the Chipotle Burger. I couldn’t even try thing because she said it tasted exactly like meat and I am not a fan of fake meats. I got the Indian Lentil Madras. It was very good, but I struggled to eat it because of how spicy it was. 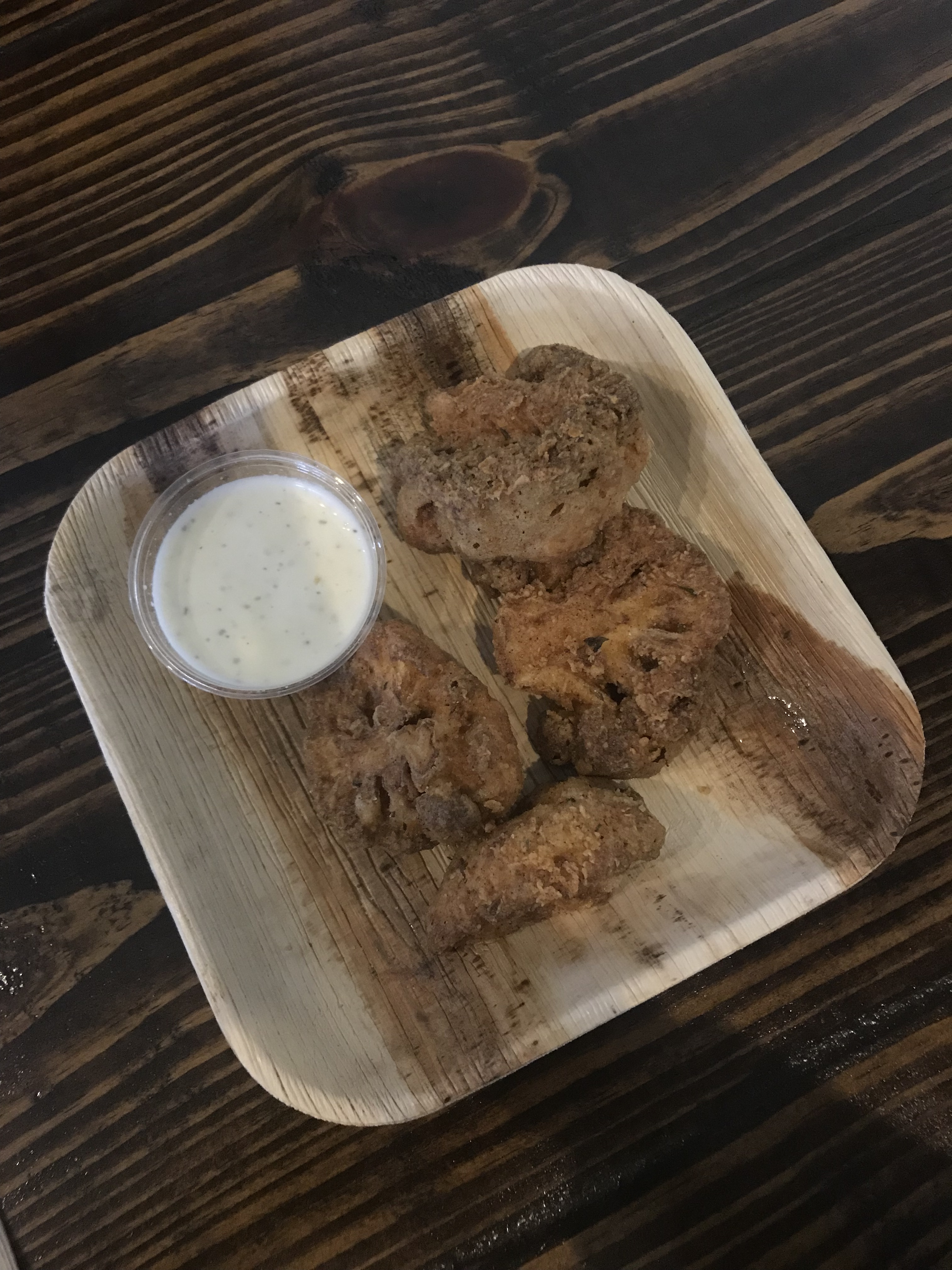 Industry– We went here for my father’s birthday. I ordered the Veggie Gyro without the spicy yogurt. It was similar to a quinoa and black bean burger, but styled in a gyro manner. It was very good. The restaurant also has a good atmosphere and a wide range of alcoholic drinks. It would be a great place to hang out with friends. 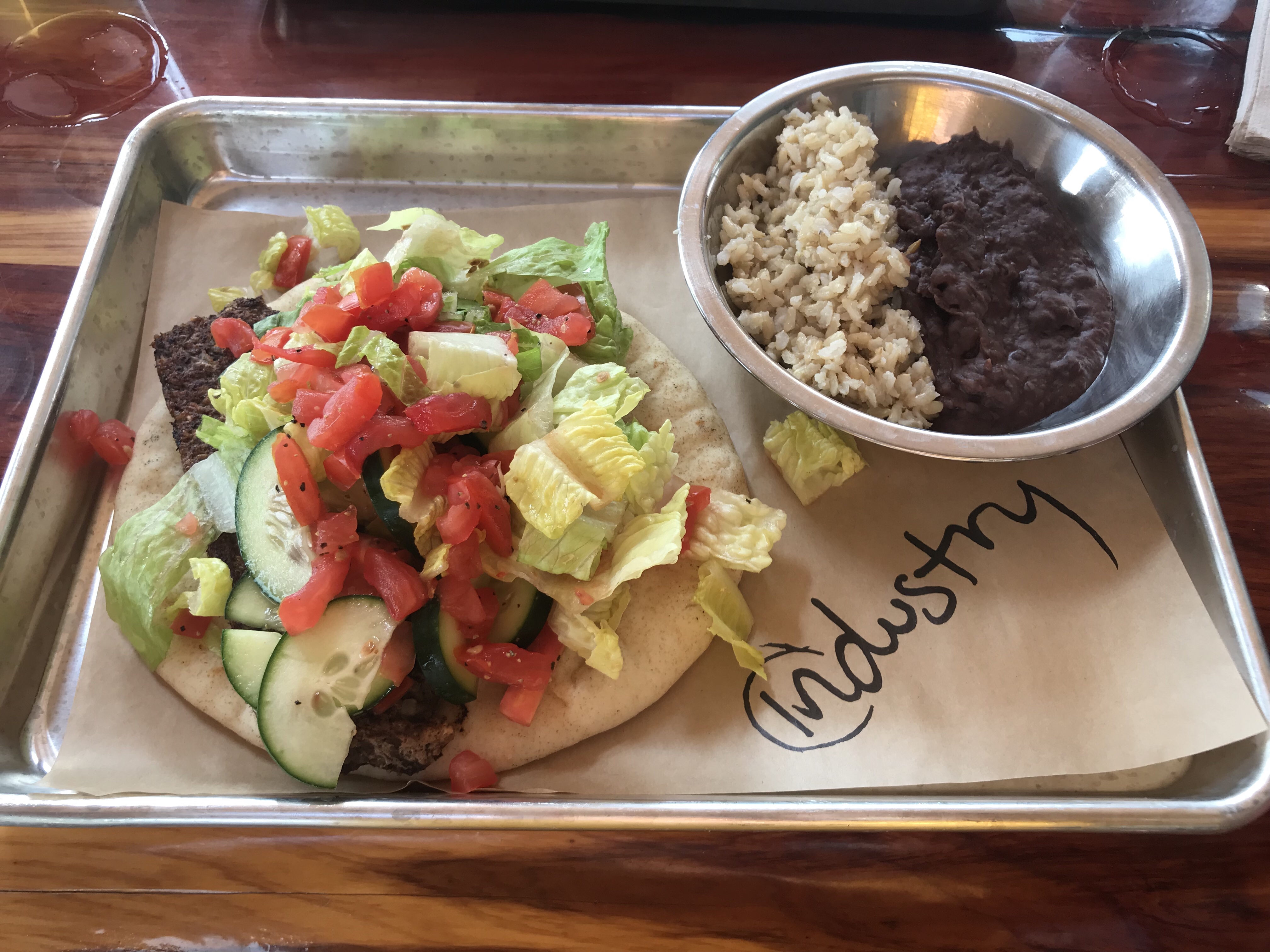 A Moveable Feast– This is a natural food store with a restaurant inside. It is near where my cousin lives in Houston and I had been wanting to try it for a very long time. I finally did and I was a little disappointed by how bland it was. I got the Happy Veggie Patty Plate with marinara sauce. I am hoping that if I go back and try something different, it will be better.

Rabbit Food Grocery– This is a vegan specialty store. I will drive to Austin, just to pick up things I struggle to find at a normal grocery store. Because it is a small specialty store, it can be a bit on the expensive side. However, it is nice to be able to eat anything in a store.

Mother’s Cafe– This is an entirely vegetarian and vegan restaurant. The first time I went I got the Vegetable Medley. It was a little on the plan side, but still good. Additionally, I had the delicious Belgium Chocolate Cake.

The second time I went, I got the Spicy Tempeh Enchilada, which comes with a side salad. Even before I was vegan, I wasn’t much of an Enchilada fan, but I wanted to try something new. It wasn’t bad and you will probably like it if you like Enchiladas. 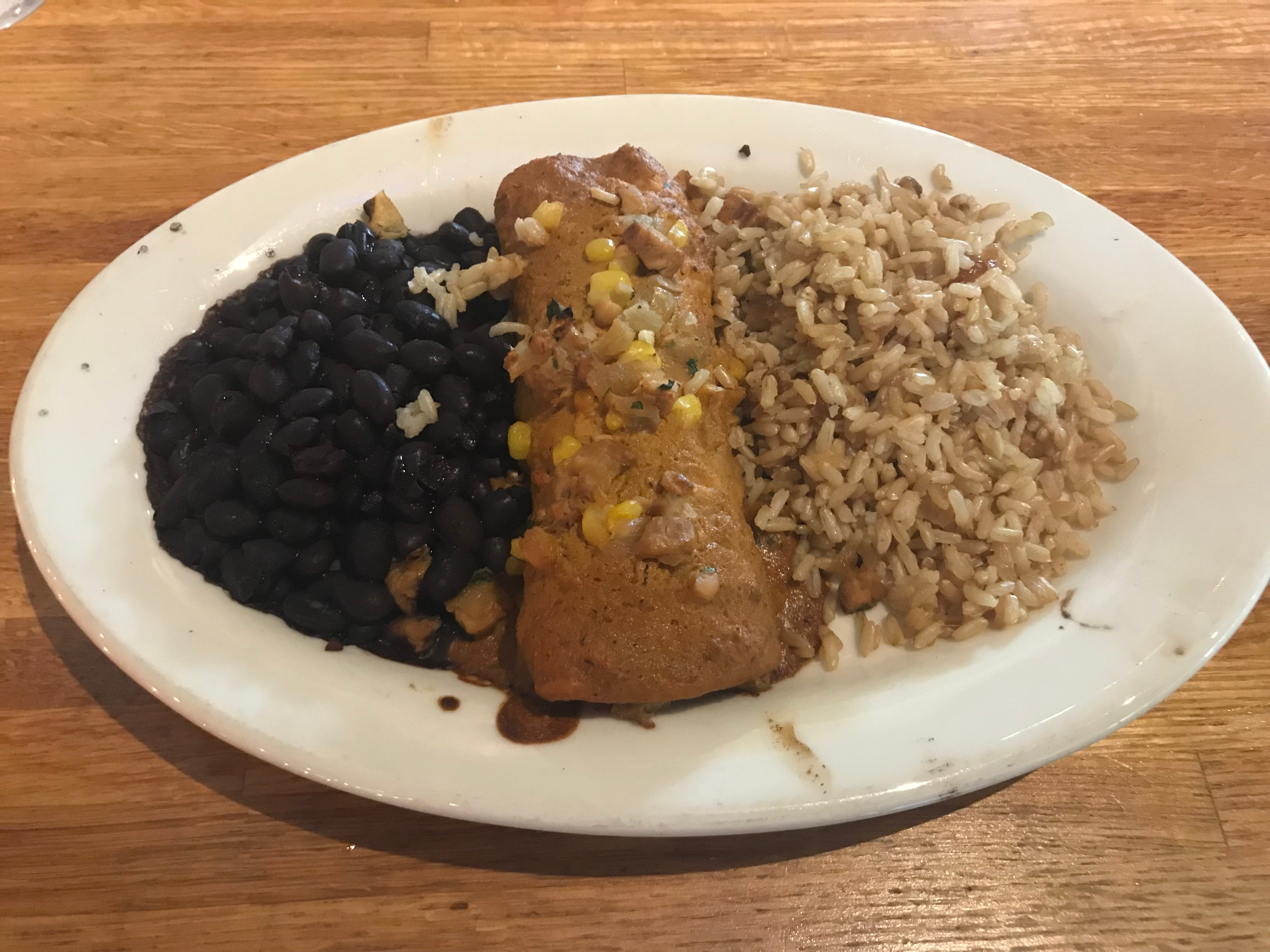 First Watch– I have only ever gone to First Watch for breakfast and have had the following things.

Both of their fresh juices are delicious: Morning Mediation & Kale Tonic

A.M. Superfoods Bowl: This is a delicious coconut milk chia seed pudding. It also comes with a side of toast with topped with almond butter. The first time I went, I was told the bread wasn’t vegan, so I swapped it for a side of fruit. The second time, I was told it was.

I have also gotten a side of the First Watch Potatoes. They are some really good potatoes.

The Village Cafe– They were very polite and helpful when I told them I was vegan. I ordered the Asian Cabbage Slaw salad with Hummus and Pita Bread. It was an odd combination on my part, but both were very delicious. 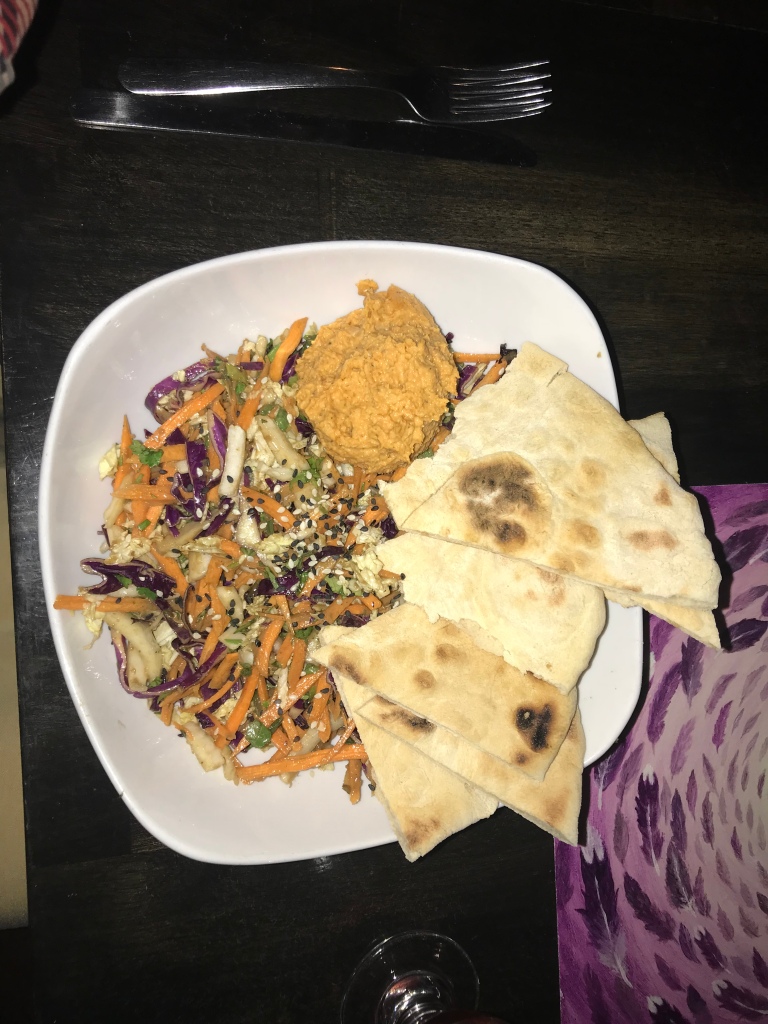 This is a bit old now, but I never wrote a post for it because I got very busy with school.

In August, I went to Vegas for my sister’s bachelorette party. As usual, I was the only vegetarian/vegan in the group and I had my whole schedule planned out for me. This included food, which worried me a bit.

The first place we ate was Gordon Ramsay Burger in Planet Hollywood. I ordered the Greek Quinoa salad with a side of fries. The salad ended up being more filling than expected and I could have probably should have shared an order of fries.

We also ate at The Buffet at ARIA. If you tell your waiter or waitress that you have a dietary restriction, the chef will come out and show you all of the food you can eat. The chef  also decided to make me a special plate. The first plate is the salad I got from the normal buffet, while I waited to see what the chef was going to make me. A little bit later a huge plate of food, made just for me, was brought out. It does not seem like that much in the second photo, until you look at the size of the plate compared to me in the third photo. I barely was able to make a dent in it. 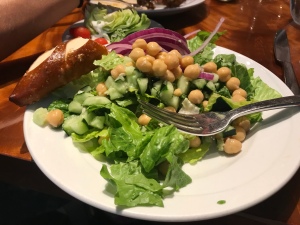 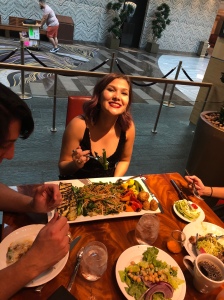 We went to a Drag Show with a brunch buffet at Senor Frog. Nothing was really labeled with what it contained, so I did my best to pick foods I knew were vegan. Not the best meal ever, but also not the worst I have had. I had plenty of fruit, some wheat bread, rice, potatoes, and and mimosas (without the champagne).

That night, we went to Fremont Street. We ate at Evel Pie. I was super excited because they had vegan cheese. Unfortunately, you can only order entire an pizza and not just a slice and no one else wanted vegan pizza. I did get the House Salad with no cheese and the Garlic Knots with vegan cheese. 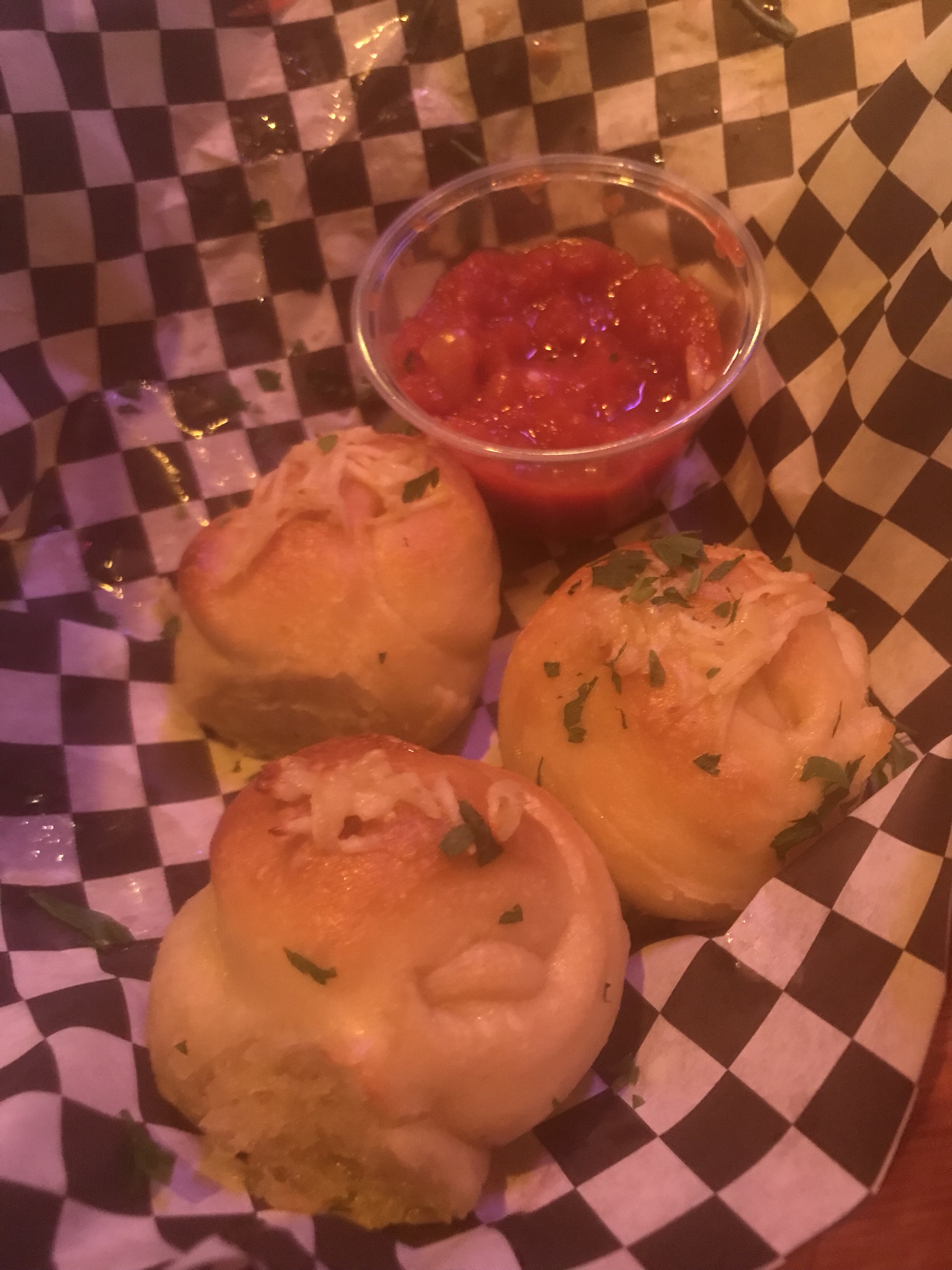 For breakfast on our last day, we went to the buffet at the Bellagio. Similar to the previous buffet, I told the waiter that I was vegan. Again, the chef showed me all of the things I could eat and also made me a huge serving of vegan pancakes, which I couldn’t finish.

This post is a little bit different than the rest. However, with the abortion laws currently being passed, I felt the need to re-share and slightly expand on a post I had put on Instagram.